Despite there unrecognised status the Fawnequin Great Dane dogs still can be registered with the A.K.C. A Fawnequin Great Dane wears white base colored coat with fawn blotches. Fawnequins can appear when two Danes are bred where both parents carry the fawn gene. And either of the parents must be a Harlequin. 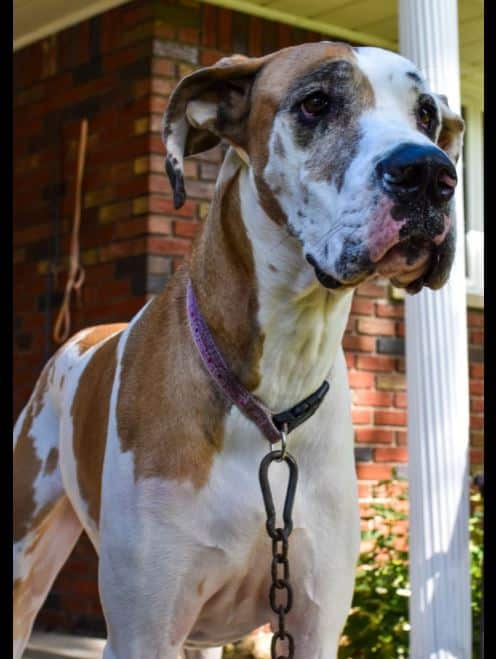 Fawnequin Great Danes can be registered with the A.K.C. like any other coat color. Provided, the dam and sire involved in the breeding are registered. Such mis marked colors and patterns can be bought by breeders who usually put them on full registration.

Fawnequin Great Dane dogs are not acceptable hence should never be bred. The moral and legal prerequisite for such mis marked Danes is to sell them solely on limited registration. To be honest only reputable breeders would do so. As fawnequins can happen in responsible breeding practice as well.

Besides standard Great Dane coat colors reputable breeders usually do not opt for unrecognized colors for breeding. Given that off colored Dane can occur with any breeder and breeding preference, limited registration, and spay or neuter contract can be regarded as efficacious steps to discourage such Great Danes further breeding.

Whilst on the other end of the spectrum, the ‘breeding for profit’ persuades non reputable breeders to choose mis marked Great Danes. Breeding mis marks including Fawnequin Great Danes can bring huge fortune by selling them as ‘’rare’’ canines. Although the Fawnequins are not rare at all but only a mis mark for the Great Dane breed.

Numerous Harlequin Great Dane breeders hold fawn genes in their lineage. So it is natural that for a Fawnequin Great Dane to appear sometimes in litter. On the other hand, disreputable breeders intentionally breed mis marked dogs to sell for huge profits, although the dogs are not healthy.

Things a Good breeder would consider

But how to differentiate between a breeder who is reputable or from the one merely looking for profits?

One of the prevailing popular opinions forwarded by Fawnequin breeders and gullible buyers is that,

Fawnequin Great Danes are as healthy as Harlequin Great Danes. Given both the dogs have similar base color and are only different in coat’s color markings. This theory does not hold ground.

The genetic pigment is not only imperative to furnishing a dog’s coat’ its color but also pre-requisite of sound and strong health. As the pigment tinge is deeper than skin, influencing the development of organs which in turn affects the health of a Great Dane.

Therefore, a Great Dane’ coat’s pigment is not nonfunctional but rather crucial for the healthy genetic makeup of a Great Dane.

Lack of color or tinge in genetic material is the root cause of diseases in canines. Given their lack of pigment, white Great Danes have health problems. Other coats having dearth of coloration also hold diseases.

For instance, Merle Great Danes who are grey colored are usually normal. Correctly marked Harlequins are too. White Great Danes occur due to a mutation in genetic material causing discoloration of the dog’s coat. This discoloration in phenotype hails from peculiar metamorphosis in genotype. Which influences health of born Great Dane puppies rendering them deaf and blind.

The Fawnequins are also discolored Harlequins. The regular black color of a Harlequin is replaced by lighter fawn tinge in a Fawnequin.

Other Mis marks for the Great Dane breed including Fawnequins

There is a plethora of distinctive though mis marked Dane puppies. These unique colored Great Danes, including Fawnequins either pop up randomly or bred intentionally by some irresponsible breeders.

Despite, Fawnequins and other mis marked Danes are not accepted for G.D.C.A. conformation shows, these dogs can be adopted as pet dogs without paying more for them.

Often, the mis marked Great Dane puppies are sold as ‘rare’ dogs which they are definitely not. Learn which Great Danes coat colors and markings are mis mark and not ‘rare’ Danes forsooth.

Kicking off with the Fawnequin Great Danes all described below Great Dane coat colors and patterns do not lag behind in beauty. These mis marked Danes are equally good-looking as standard Great Dane dogs.

As broached above, Fawnequin Great Danes wear a white colored coat displaying fawn dapples. The Danes are called ‘Fawnequins’ in that the fawn colored markings are in Harlequin pattern.

Merlequin’ Danes white base coat expresses a fair amount of Merle pattern. The Merle markings could be either greyish blue, or dark brown. Usually overall Merle blotches on a Merlequin Great Dane have a dark tinge.

Fawn Merle Great Danes hold Merle pattern on fawn base coat color. As Fawn Merle Danes grow the Merle spots fade away either remaining on some parts or disappearing altogether.

The Chocolate Great Danes have chocolate coat color. Muzzle for Chocolate Danes also appears brown as well as its ears.

Chocolate base coat color with beautiful Merle markings all over its body is the appearance of a Chocolate Merle. The Danes retain their Merle pattern as they grow up. The pattern of dark colored splotches on a Chocolate Merle differs for each Great Dane puppy and these dapples could be anywhere on its body.

Brindle Mantles possess brindle pattern and markings on a white base coat color.

Piebald Great Danes display mantle pattern on head whilst all the body is affected by discoloration. The white bodies of Piebald Danes indicates the health problems arising from lack of pigment.

White Great Danes are double Merle Danes. The dogs are prone to a lot of health problems as the dogs inherit flawed genetic material. The White Danes could be hearing impaired and blind, besides having other ailments.

Although, the Danes are called white yet they might have colored patch on their bodies. The eyes, eyelids and lips of White Great Danes also wear color pigment.

The aforementioned Great Danes coat colors are considered mis marks for the Dane breed. Such Danes are not favored for dog shows including Onyx Brindle. Hence, it is not impregnable to introduce a mis marked Dane in the show ring and indulge in breeding such Great Dane litter.

If a Fawnequin Great Dane is bred with another Fawnequin Dane the litter produced may have;

Any of the puppies could be still born. Moreover, the litter could be prone to a plethora of ailments ranging from genetic problems to coat and skin diseases.Therefore, Fawnequin Danes breeding together is not recommended.

Many breeders who follow the dictum of breeding for profits, from time to time come up with a publicity stunt to sell their mis mark Danes. Calling a Fawnequin Great Dane as Scooby Doo is similar hype.

Basically, Scooby Doo’s markings and pattern is neither Fawnequin or any other. Scooby Doo is a Great Dane designed by amalgamating various coat colored Danes. And is solely a Great Dane crafted of imagination.

Should The standard be reviewed?

For Great Dane breed maintenance of the health and capability of the breed, could be achieved through the acceptable Great Dane coat colors as the breed standards have already instituted. Hence, there is no need to include more coat colors and combinations.

For instance, Merle genes are lingering in every Harlequin lineage. Harlequin is an acceptable Great Dane breed coat color. When bred, a Harlequin Dane produces Merle color in litter.

Irresponsible breeders not only put the breed’s conservation at risk but also increasing the number of unhealthy mis marked puppies. While breeding for such a pet dog, breeders ought to consider the existing number of mis marked pet dogs who await homes.

Getting such a retarded mis marked Dane holding flawed genes are difficult to pet as well. Even though you might have bought the puppy as ‘rare’ it does not guarantee anything. The puppy could be deaf or blind. Which means extra care and attention from family. More veterinary visits which would increment on bills. Moreover, such puppies necessitates careful and in-depth training from their owners.

As of now, in the USA there are no concrete laws to make people abide by the breeding norms, irrespective of the color or breed. Generally. A.K.C. registers any canine as long as it is purebred, i.e bred from the same breed’s dogs already registered with the A.K.C.